Skip to content
Home > All Our Voices > Earthquake in New Zealand 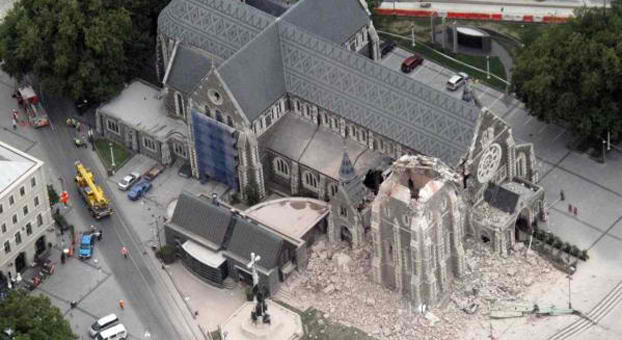 Our thoughts and prayers are with the people in Christ Church, New Zealand, after the serious earthquake there.

Amongst the buildings badly damaged is the Cathedral. There is more news on the Christ Church Diocesan web site, which tells us of the tragic deaths of visitors who were climbing the Cathedral tower.

Police say there is no possibility of survivors in the rubble of Christchurch Cathedral. Superintendent Dave Cliff said today 16 to 22 people were presumed to have died in the cathedral, which was devastated in the 6.3 magnitude quake on Tuesday. All nine cathedral staff survived, although one of the cathedral volunteers was admitted to hospital with injuries. Mr Cliff said those people would be among the growing number of bodies being sent to the temporary morgue set up by emergency services. Mr Cliff said the focus remained on finding survivors. “This is very much an operation around rescue; it’s looking for the living. “If we find a body but we can’t recover it quickly, we will carry on.”

Dean Peter Beck told the BBC that he managed to escape his cathedral office and help get people out of the cathedral. A video and interview with the dean by BCC can be seen here. One television video reportedly showed a person clinging to a window in the cathedral’s tower. “The most important thing at the moment is not the buildings, it’s the people,” said Dean Beck. “We’ve got to reach out to each other here in Christchurch and Canterbury and do what we can to deal with those who are wounded, those who have been killed and their families.”