So much spins around us that many of us rarely, if ever, contemplate our personal vision. May I give you an excuse to do so here? Imagination is incredibly important in this because it sees more possibilities than limitations. So, set all those voices aside which say “No” and “Yeah, but . . .” If you can imagine something, you can usually work out a way to do it.

A Drawing to Contemplate
Now, I hope the simplicity of this exercise is not below you, but, hey, maybe that would be a good thing. Use this drawing to help you contemplate your vision. And, no you don’t have to “draw good”. (Consider a pencil with eraser.) 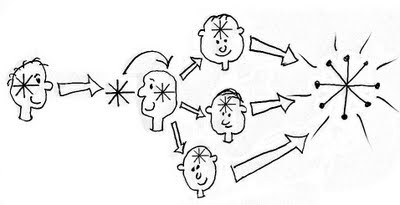 The community that shares the vision creates it in the material world. The thing that was in your mind, unknown, intangible, eventually becomes a tangible, beautiful object, and maybe even has a little extra to it, because the people got together. This could be a crude picture of your progression. When you draw this for yourself you ought to sign and date it so that it is worth a lot of money hanging in the museum commemorating the beginnings of your historic work.

Partnering with God
This is a simple approach to the very model found in the story of beginnings with Adam and Eve, how God brought out the unknowable, shared it with their new minds and let them run with it. The Apostle Paul wrote in I Corinthians chapter 3, verse 9, “We are fellow workmen (fellow laborers) with God.”

In the book of Ephesians, chapter 2, verse 10, we are described as God’s workmanship, God’s handiwork, made to do good work and live a good life which God prepared for us to do beforehand. We are like a poem, a sculpture, a beautiful work of art, which God has made; not just to sit here and be objects, but to actually do important things. 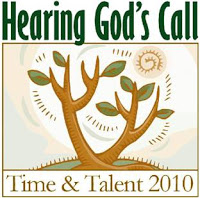 What could you be passionate about, in your life? That is a likely candidate for what God wants you to do. What is your passion right now? What is your long-term passion? Contemplate that. Begin to imagine it. Describe it in detail: what it looks like; what it sounds like; what it smells like; how you will feel when you are accomplishing it. Your vision will begin to come out into the open and become a context for the choices you make in your life. That is a major way God works in you to give you good direction, especially as you dialogue with God about these passions. Integrate these dreams into your prayer life. Maybe they will motivate you to start a prayer discipline if you you haven’t already. And maybe doodling while you pray will help.

1 thought on “8 Steps to Draw Your Vision Out”